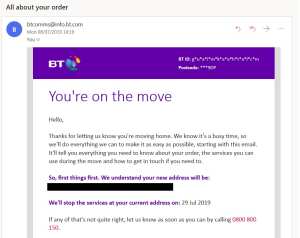 Charlee
I'm have been using BT Broadband from September 2017 (on 18 months contract bases). Generally, speed is exceptionally good (I can't say great or outstanding) but occasionally (once in 2 or 3 weeks) connection will drop, and the router will reboot itself and connects you back again. I'm okay with that as long as it connects without any issues. However, the main problem with BT is its customer service. One needs to wait a long period in the call to get connected to customer service. Once connected, the customer service executive will listen to your query and raise a complaint saying, somebody will call us to resolve the issue. A couple of days/weeks later someone will call us and give some penny's compensation and do nothing about the issue. A month or 2 later the same issue again and the same process again. Awful service. Apart from the these issues, I have been cheated on the contract term even though I have evidence in writing. It all started with my home move in 2019. I asked to move the services to the new address well in advance (requested placed on 8th July 2019 to move the services to the new home on 29th July 2019). During the call, the customer service executive said that I have to do the re-contract for 18 months again (originally my contract was 18 months) at the same price as before else I have to pay £120. I was happy to re-contract at same price rather than paying £120. I received a mail with the new contract terms wich saying like this "Package - Broadband and Calls Because you're moving home, your line rental contract will be renewed for 12 months, starting when your phone service starts at your new address. Unless we've agreed otherwise, any other contracts you have will continue until their original end dates." I called customer service again and reconfirmed about the contract length (18 months). However, on the day of the move (29th July 2019) received a text message stating that there are some technical issues, the services move will be delayed. On 5th Aug 2019, I was back on broadband. Fast forward to April 2020, BT started charging me more than my contract price from March 2020 bill. I called customer service and got to know my contract is expired. I was on call for 1.5 hours trying to explain my contract was not expired stating to the mail I received during the home move. If I was re-contracted for 12 months or 18 months, I will still be in the contract considering my services at the new home started on 5th Aug 2019 (it's been 9 months from the move). No matter however I try to explain to him, he is in no mood to listen to my explanation. He said BT will consider the time I spent at the old address into 18 months contract. I was referring to the mail I received during the move but he replied they can't listen to the calls recorded during the move (considering very old). He insisted to do re-contract to avoid extra charges. I declined and ended the contract. I felt like I have been cheated.
5 months ago