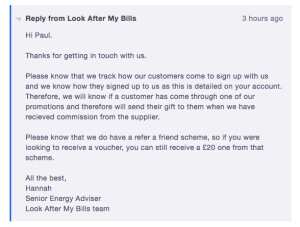 Paul
Free £20 Amazon Voucher is a scam After being bombarded with emails telling me how and why I should sign up to Look After My Bills, I received an offer with a free £20 Amazon voucher, so that persuaded me. Weeks went by, no Amazon voucher. I contacted Look After My Bills to ask where my voucher was. Another week went by, I contacted them again to ask where it was. Eventually someone replied telling me I wasn't eligible for the voucher saying I had signed up via Facebook - which I had not. These guys might be able to save you money, but the customer service is dreadful and not pleasant to deal with. Really disappointed with a company that seemed to promise so much. ------------------------------- In response to Hannah’s reply which I have added: Hannah, firstly, I did not get in touch with you, I left a review on Trustpilot. I have tried to get in touch with Look After My Bills on more than one occasion, but no one replies. I feel very reassured that you track your customers! If you know so much, surely you can see that I entered my details to find out how much Look After My Bills would save me. But I did not sign up. You will know this by tracking the daily emails you sent me asking me to sign up. But I did not sign up. Not until I was offered a £20 Amazon voucher - only at that point did I sign up. So I sign up, and you say no voucher. And looking on Trustpilot, it appears I am not the only one who has been fooled by this scam. Now I’m stuck with a utilities company who I doubt will save me as much money as estimated. And my smart meter is now defunct. As for refer a friend - you are joking right? Does this one-star reviewer strike you as the kind of person to refer a friend to a company I wish I hadn’t signed up with? One star is not good.
1 month ago

Look after My Bills has a 4.33 average rating from 615 reviews