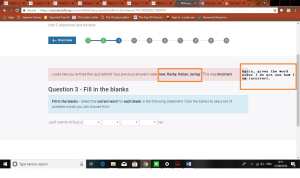 Anonymous
06.09.18 As a person whose first language is English, I find some of the explanations unjustifiable take for example Attachment #2. The answer is ‘false’ yet the system marks the question wrong. The explanation given proves or confirms that my answer is correct! Similarly, the explanation given for ordering adjectives does not quite seem to be in keeping with attachments 1 and 3. After all, ‘silver’ is a colour and it is a material. I quite frankly don’t know how to rate this course as an English course whether it be for native English speakers or persons learning for the first time as to me it only seems that it would lead to further difficulty with understanding the rules of English. I understand that it is a matter of being able to communicate ‘how to teach English’ to non – English speakers whose language structure does not allow for certain parts of speech, but still! It is a shame that my country is not recognised as an English country, after all we were once a British colony, that’s the reason I am taking this course. But to some degree so far, at least for the grammar part, I find it a bit insulting even though it serves as review for me. However, since I have not completed the course, rating it at this point would be unfair. 07.09.18 The response received with respect to the initial review seems to have focused on one issue raised. Other issues concerning explanations and justifications for correct and incorrect answers were merely ignored and brushed under the carpet. Thank you.
2 years ago