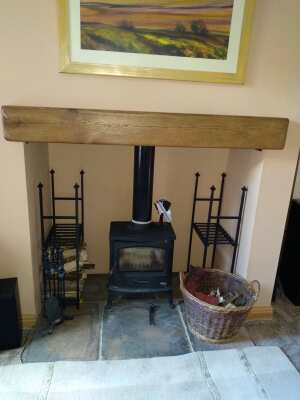 Martin Price
The beam was delivered well wrapped in the timescales stated with clear notification of dispatch and estimated delivery day, though it is a shame UPS can't give estimated times like other delivery companies. Once unwrapped, we were very impressed by the appearance of the beam. As per the guidance, we left it in the room for two weeks (well almost), before fitting it. Fitting was a challenge. The keystone fixings were each slightly different distances apart requiring a spreadsheet to calculate where all the holes needed to go. Each fixing was also a slightly different distance from the bottom of the beam requiring more precise measurements and calculations about where to put the holes vertically. The instructions say once you have fitted the screws to lift the beam onto the screws - easier said than done! I can't think of a simple way to make this easier, but it was quite difficult to install. We couldn't get it on at all with the screws at the recommended protusion of quarter of an inch, so had to move out to 3/8 of an inch (I'd had to use longer screws anyway due to our chimney breast being covered in dot and dab plasterboard), which was still pretty tricky but we finally got it up. We are very happy with the final result. It looks very nice above our fireplace.
2 years ago

Traditional Beams has a 4.90 average rating from 1,173 reviews