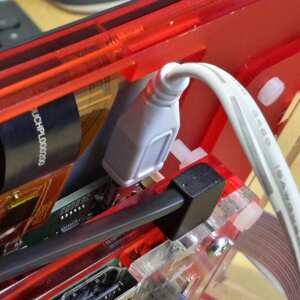 Harald A
I'm using these cables on three Raspberry Pi 3s with the official touch LCD to power the Pi in series with the LCD from the official 2.5A power supply. Sufficiently here means that I don't get the yellow under-voltage bolt or the flashing power LED. However, while the cable works, there isn't much reserve, both mechanically, as well as electrically. Mechanically, just 10mm more would have made this cable much easier to install. As it is, you need to plug it in before installing the Raspberry Pi in place at the back of the LCD adaptor board. Afterwards it's impossible to do. Seeing it from a different angle, this cable can never wiggle loose. But any joking aside, the combination with a Pibow Coupé works, but the bottom acrylic plate needs to be left out from the assembly, because this cable is too short by a few millimeters. Electrically, the cable should have been made thicker. Instead of the flat and rather tiny power cable, a heavier AWG gauge would have given any project the necessary power supply reserve margin. As it is, the combo of Raspberry Pi 3 and LCD works, but don't attach too much to the Pi. Despite this, 4 stars out of 5 for a product that's reasonably priced and that sufficiently works; something that can't be said of many USB cables. 5 stars if the next production run would improve in cable length and gauge.
1 year ago