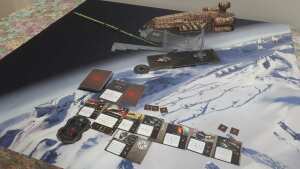 Andrij G
I was wondering if I could share a Huge Ship conversion kit with another person, if it has components enough to convert 2 ships. The answer is: this kit can convert TWO DIFFERENT ships (CR90, Raider, Carrier, Rebel Transport, C-ROC - pick 2 of 5) for a SINGLE player (or a group of players who always play epic together). The reason is, it only has one new maneuver template (it's plastic now, the caliper-looking one) and one 5-range ruler (my C-ROC didn't have any range 4-5 weapons in the first edition, so it didn't include the extended ruler). But apart from that, you get TWO new plastic bases and cardboard bases to convert TWO different ships (e. g. a CR90 and a Rebel Transport), so that you can always convert an entire faction (e. g., the Imperial Corvette and the Assault Carrier are available for both Empire and FO). However, you only get one damage deck (it is not ship-specific anymore, just a Huge Ship Damage Deck), and I feel that it may be not enough, since there are only 30 cards in it and some Huges have 20 Hull. (Note that you won't be able to convert, say, two C-ROCs even if you want one to be Separatist and another Scum, because their cardboard bases are printed on sides of the same piece, so that has to be two different ships.) Also, the mechanics of epic play are much clearer compared to the first edition; stress tokens on a Huge are counter-energy in the same sense as jam tokens are counter-green tokens; you need SIX ion tokens to get a Huge ionized; there's no more separate 'front-side damage deck' and 'rear-side damage deck', instead huge ship damage cards have an extra immediate crit effect which only triggers if the attacker is in a specified arc of the Huge (shooting from the back may ionize it a bit, shooting from a side turns some weapons offline (usually need energy to fix), shooting from the front may reduce its action capability and shooting from the bullseye may turn off some crew members). One more thing: instead of having tons of shield / energy tokens on the table, they gave you a tracker where you can set current and maximum number of both anywhere between 0 and 9 with dials. The other convenient bonus is that you get lots of huge ship upgrade cards (cargo, hardpoint, team etc.) in a single set, no need to buy multiple huge ships from different factions.
1 month ago