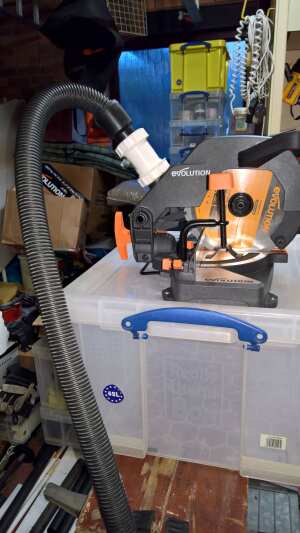 Anonymous
I have only one Evolution Power Tool. I bought it some days ago and I am happy with it. Around 25 years ago I bought myself a single bevel mitre saw. I loved it and it has always been one of my favourite tools. Sadly it became a bit tired and worn and I have wanted to replace it for at least a year. My problem in doing so wasn't that there aren't any on the market. My problem was that I wanted one just as portable and capable as my old one but wasn't weighed down and doubled in size by features that I appreciate but don't have room for. When I bought my original saw it was listed at around £170, but for some reason I could not understand a local store was selling a returned, but unused one for £70. Being offered Evolution's R210CMS for the current regular price of £49.99 bordered on being just as unbelievable. Having bought one I spent a while getting to know it and making some test cuts that I found most satisfactory for the kind of use I have as a frequent diy-er. I also very much appreciated the considered and attractive design it has. I had looked at a number of similar saws that I don't doubt worked, but they were really inelegant in their implementation. There were more smiles to come as I found that it fitted very comfortably into my 42 Litre Really Useful Box that I had stored my original saw in. Whilst my original saw had a port on the side that a vacuum cleaner could be attached to, it was more of a token gesture than a practical feature. That turned out to be not so in the case of the R210CMS. The port is located tidily out of the way at the back. At first glance I thought it might take a plastic 40mm compression fitting straight coupling. Not only did it do that, my smiling little Henry vacuum cleaner's nozzle fitted into the other end. I've added a photo of the saw in the storage box, and one of the connected Henry. In the latter it has just been set up liked that for demonstration purpose and not to indicate how the saw should be used. It definitely shouldn't. The instructions for use that are provided are sensible and should be followed.
3 years ago

Evolution Power Tools has a 4.58 average rating from 9,592 reviews