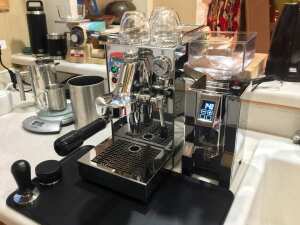 Paul
I had my eye on a Sette 270 as the obvious choice for my first ‚Äúreal‚Äù grinder. But I could not pull the trigger because everybody says it‚Äôs super loud, and the risk of waking my kids up in the morning or during nap is a major no-go. In the end, I‚Äôm glad this concern led me to the specialita, which I have found to be overall fantastic despite a few minor complaints. Pros: - Solid build - small but dense. - Grind quality is good. I'd describe it as fluffy micro-clumps, which distribute easily. - Pretty quiet. - Low retention. Well under 1g. Great for single dosing. - Flat burrs. My personal preference, and often a higher price point feature. - Small design. The rectangular footprint makes it efficiently use countertop space. - Reputable brand. - Nice timer features. Read the manual - there are a lot of hidden options. - The screen is bright and responsive. - The adjustment knob is fantastic. Solid feel, stepless with numerical increments, and I like it a lot more than spinning the hopper. - Looks pretty cool. The chrome version has a nice ‚Äúshield‚Äù design cut out on the side, which looks good in person. It‚Äôs also a nice gloss polish. Cons: - It‚Äôs quiet, but not as incredibly silent as some claim. It‚Äôs certainly still louder than my vibration pump espresso machine (see video). Note that it is much quieter when the hopper is full than when single dosing because noise comes out the top. - It lacks a catch tray and at the same time has an odd footprint in front that loves to gather grounds. - The hopper plastic scratches very easily. - Since I, like many specialita users, got it for single dosing, the timer isn‚Äôt necessary. This is probably $100 in functionality that goes unused. The silenzio and manuale have 50mm burs and thus worse retention, making them poor alternatives. - The portafilter holder is a bit too clever for its own good, and without getting into too much detail, i ended up sticking some coins into a gap to keep in in place and putting a rubber bumper behind it to keep the end of the screw from scratching the machine (see photo). - There‚Äôs plastic used in places, like the chute. I also suspect that the front bezel pieces that otherwise come in funky colors are just chromed plastic on the chrome model. - The ‚Äúspecialita‚Äù logo on the front-bottom is just a sticker and kind of a low-quality detail to be placed front and center. I‚Äôd personally peel it off if I wasn‚Äôt worried about resale.
2 years ago