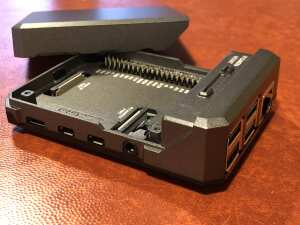 Anonymous
Cant fault pi hit whatsoever, great shop, speedy service, always been happy purchasing my pi stuff from here (I’m uk based) Pi 4 is performing very nicely, obviously use Ethernet for full potential. Fast speeds, CPU is overclockable, and I got a rev1.2 board which fixes the USB-C issue I believe (rev1.2 often not advertised) Nice amount of ram, Ubuntu running well on it, though a different desktop environment, other than gnome, may be more efficient on the hardware. Ubuntu server (headless) or Raspbian will likely run even better. I’m using it as test bed for web dev, among other things, and it’s running nodejs and mongodb very nicely, will be adding Vuejs to the stack to form essentially a MEVN stack, though may use fastify instead of Express! Testing my backend REST Api, it was managing between 100/200 requests a second, (requests hitting nginx reverse proxy, nodejs event handling, and fetching from mongdb), May be able to get better performance from it, as these were just initial tests.
1 month ago