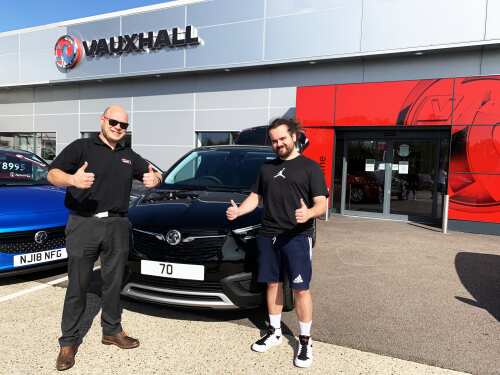 Jack Browning
Having had my 2010 Vauxhall give up the ghost a few weeks ago, and some pretty terrible experiences with a couple other dealerships elsewhere, it was getting pretty desperate before I remembered, although being somewhat far away, how well Quest had treated my family and I in the past. I phoned just past closing as I later found out, but one of the staff took all my details and said that Peter from the Braintree Vauxhall branch would get in touch with me the following day. That night in fact, at around 11pm, Peter emailed me, even apologising for the previous hassle with other dealerships entirely unrelated to Quest. He informed me he had some new and used models of the Crossland X that I was interested in, and that I could come in at any time the following day and he would make time for me. The next day, I took the train and then got a lift from good ol' Mum and went to meet Peter. Straight away, I was treated like an old friend, and Peter and the team were professional, but most importantly, so helpful in not only telling us our options, but also in offering solutions for any problems that could arise. He was funny, friendly, and very accommodating, alternating between his desk, the forecourt and most places in between to show me the model he thought was best. In just under an hour, I had decided on a car, and had passed finance. What really made me want to ensure Peter and the team got a write up is this: being self employed, my car is my lifeline. Two weeks without one was so difficult. So? Peter set me up with a set of wheels until the new car came in. He even waived the fees for any insurance, and had me on my way under my own steam in less than half an hour. People are far too quick to complain about the bad, but this restored my faith in car shopping and confirmed for me that Vauxhall is the best choice. It was painless, informative, and just so incredible, I think the whole family want to come to Quest Braintree from now on! Thanks again for everything, you've got an absolutely stellar team who are a credit to Quest and the brands that you represent. Jack
10 months ago

Quest Motor Group has a 4.90 average rating from 768 reviews

Your email address does not match your company details. One of our team members will be in touch shortly. Alternatively, you can open chat if you would like to discuss your account.